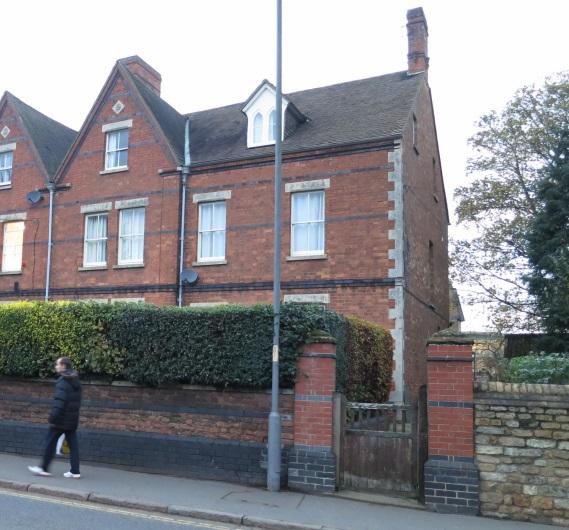 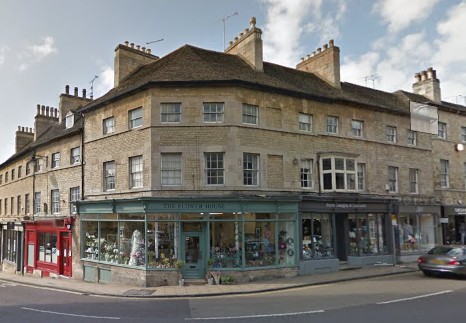 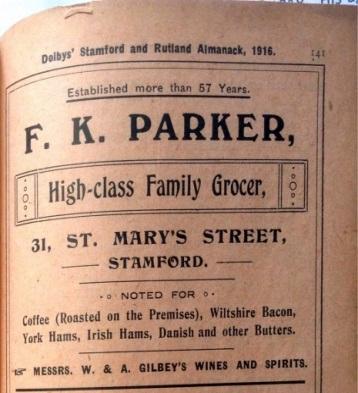 By the time Frederick Eustace Parker was born in 1894, his family were well-established traders in St Mary’s Street.

His grandfather Thomas King Parker had a saddler’s shop at 32 St Mary’s Street and this is where his father, Frederick King Parker, started work.

However Frederick King branched out in a completely different direction taking over a grocer’s and wine merchant’s shop at 31 St Mary’s Street.

He was clearly successful because in the early 1890s he was able to give up living over the shop and move out to St Stephen’s Villa on Ryhall Road, a house with 10 rooms.
This is where Frederick Eustace grew up.

In 1911 his father was 63 years and his mother 53 years. Four of their six children were living at home – as well as 16 year old Frederick Eustace there was the eldest Ernest Arthur, a political agent aged 29 years, a sister Gladys Kathleen aged 19 years and the youngest, Helen Margaret, was only 8 years. Also in the household were a domestic servant and a boarder Raymond Bushell also aged 16 years (see separate page). The two 16 year old boys were both engineers’ apprentices at the Agricultural Implement Works.
Frederick Eustace joined up as soon as war was declared. He attested at Luton on 28th August 1914 joining the 4th Lincs Regiment and training at Luton for 6 months. He went to France in March 1915 and remained there until May 1916 gaining promotion to L/Cpl in Oct 1915 and Sgt in March 1916. A few days after he was appointed Sgt, he received a gunshot wound in his leg and spent time in hospital at Le Harve before being sent home to hospital in Lincoln where he remained for 2 months. Cartilage was removed but he suffered recurring inflammation causing ‘wasting of the thigh’.
In July 1916 he joined the 4th Reserve Battalion fit for light duties with a view to retuning overseas in 3 months. In fact it was to be a year during which time he transferred to the Machine Gun Corps. He was sent to Egypt in July 1917 where he remained for the rest of the war. On 11th February 1919 he embarked at Port Said for his return home and was demobbed in March.
After the war Frederick Eustace did not return to engineering but joined the family grocery business at 31 St Mary’s taking over after his father’s death in 1925. The family also had Worthmore Stores on the High Street in the charge of his brother Ernest Arthur.

Frederick Eustace married Dorothy Ingrey in 1929 and they had 2 children. It was left to his son, another Frederick King Parker, to return to engineering. Although he ran both the Grocery and Worthmores (until the late 1960s or so) he was more interested in radios and receivers and founded the successful Park Air Electronics firm which began in Stamford in 1966.
He died at 122 Empingham Rd in 1967 aged 73 years and his widow moved to Rutland Terrace.