Fred was born in Hucknall Torkard – now known simply as Hucknall, Nottinghamshire in 1898. In 1911 he was living in Stamford at 39 St Paul’s Street (now demolished) with his parents Frank Woods and Mary Ann (nee Hodgett) Woods , his sister Lucy (11) and brothers Frank (8) and Bertie (4). His father was a fitter at Martins Cultivator Company – both his parents and all his siblings were born in Stamford.

In 1901 the family had been living at 2 Reynolds Court, St George’s Street. At the time of that census his father was a soldier serving in South Africa in the Second Boer War.

Following in his father’s footsteps Fred enlisted for military service in Sleaford joining the Northumberland Fusiliers 1st Battalion (Regimental No.36267). Details of his early service have not been located. From the WWI Casualty Records we learn he served in the Western Theatre of War (France & Flanders). On 3rd May 1917 at the age of 19 he was wounded and presumed killed during the Arras Offensive (April/May) 1917 during the Third Battle of Scarpe.

The Third Battle of the Scarpe, as the fighting over 3/4 May 1917 was named, was an unmitigated disaster for the British Army which suffered nearly 6,000 men killed for little material gain. In the Official History, Military Operations France and Belgium 1917 Cyril Falls gives the following reasons for the failure on 3 May 1917 in the VII Corps frontage:

“The confusion caused by the darkness; the speed with which the German artillery opened fire; the manner in which it concentrated upon the British infantry, almost neglecting the artillery; the intensity of its fire, the heaviest that many an experienced soldier had ever witnessed, seemingly unchecked by British counter-battery fire and lasting almost without slackening for fifteen hours; the readiness with which the German infantry yielded to the first assault and the energy of its counter-attack; and, it must be added, the bewilderment of the British infantry on finding itself in the open and its inability to withstand any resolute counter-attack.” 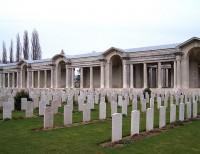 Having no known grave and based on his relevant military service, Fred has recently been accepted for commemoration on the Arras Memorial.