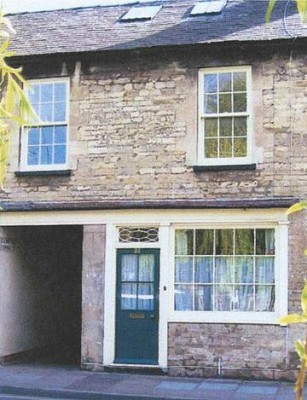 Walter  was born in Peterborough in 1898 and lived at 21 Water Street in 1911 where his father James ran a baker and confectioners’ shop. Walter helped his father in the bakery and was the middle child of 7 children all living at home. His brothers Frederick and Alfred also enlisted.

At the outbreak of WW I he joined the Lincolnshire reservists, being attested on 25 Nov 1914 as Private 9126. He was then 5ft 6ins tall and of ‘fair’ fitness. He was mobilised as part of the 4th Lincolnshire regiment on 22 Feb 1917 and sent to France the next day.

In 1922 he married Eva A. Cowham and recovered sufficiently from the effects of gas to live until the age of 92, dying in Stamford in June 1991. Hudson’s bakery was still in business at 21 Water Street in 1950 but closed soon afterwards.

James Walter Victor Hudson Wally was born on 22nd July 1897, believed to be in Crowland. He was the 4th child of 7 born to James and Selma Hudson, travelling bakers. The family eventually settled in Stamford when ‘Wally’ was still a toddler. They moved into Water Street where his family continued as bakers. He was educated first at the Catholic School then later at Bluecoat School. At the age of 14 he became a telegraph boy. 2 years later he started an apprenticeship at Blackstones but that was cut short by the outbreak of World War I.
Wally joined the Lincolnshire Regiment and served time in Ireland before being posted to France. During hostilities he was gassed and lost his eyesight. He was given the option to return home or remain in France for treatment, which he did, and eventually regained his eyesight. He continued service until the end of the war.
He then re-joined his family at the bakery. It was on his return to Stamford that he met his soon-to-be wife Eva Cowham who was living in Vine Street. It was alleged that a monkey stole Eva’s hat at Stamford Fair and Wally rescued it. On 17th April 1922 Wally married Eva at Market Overton Church, where he set up his own bakery business.
It was while he was delivering bread one morning in Ashwell that he risked his life to aid a pilot whose plane had crashed. He was unable to save the pilot’s life but his action won him the Brave Conduct Medal. After 37 years in the bakery business he decided to take a more secure job in the Mess at RAF Cottesmore until he retired at the age of 68.
Wally and Eva had 5 daughters Joyce, Doris, Sophy, Vera and Molly; and 1 son, Alan. In 1982 they celebrated their diamond wedding anniversary with their children and numerous grandchildren.
Eva sadly died in September 1983 after suffering a stroke. Wally died in Grantham Hospital after a short illness in 1991 at the grand old age of 92. His great-grandson is named after him.
Added by Wally’s granddaughter.
If you have anything to add to this page - Please Contact Us